Beatnik Country House is named after the bohemian freethinkers of the 1950s and ’60s and celebrates their defiant and artistic legacy. As a historical touchstone, one beatnik commands their nostalgic reverence: Yves Saint Laurent, a pioneering genius who transformed his era and democratized fashion with timeless and seductive design.

“We are most excited to introduce Beatnik Country House to locals and travelers alike,” says Daniel Alonso, Founder and Creative Director of Bonhomme. “Every detail has been carefully and thoughtfully designed to create an international affair not only through the dishes, but in the atmosphere.”

Executive Chef Marcos Campos, was born in Valencia, and  began working in his father’s butcher shop at a young age, which further fostered his dream of becoming a professional chef. 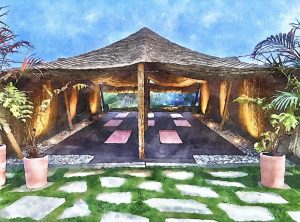 After graduating from culinary school, Campos went on to work at Michelin-starred Las Rejas in Cuenca, Spain. It was while working in a Spanish restaurant in Denmark that Campos first connected with Alonso, who, at the time, was expanding the culinary team of his Spanish restaurant Black Bull, now Mama Delia, in Chicago.

Rising quickly, in 2012 Campos became the restaurant’s chef at the age of 20. As Bonhomme has grown over the last decade, Campos has grown with it, today leading the culinary team at Michelin-starred Porto, as well as opening and overseeing the kitchens of the group’s other acclaimed venues.

Guests go on a journey without borders, playing with flavours and ingredients from the eastern Mediterranean to North Africa and across the Atlantic to Mexico and South America.

The dishes on the seasonally changing menus are designed to be mixed and matched, creating an international dinner party in the process. Desserts take inspiration in classic sweet dishes before channeling more contemporary methods and intriguing ingredient pairings, finding the perfect balance between nostalgia, sweet, savory and adventurous.

Beatnik Country House’s wine cellar takes guests on a journey through the Iberian Peninsula and the islands of the Atlantic and Mediterranean.

The producers on their list create wines that are deeply evocative of the lands and landscapes they farm by combining an experimental craft mentality with a profound respect for the agricultural history of their regions. Their small-production, must-try bottlings are bold, daring and refreshingly unpredictable.

Cocktails are colorful and resourceful, often finding inspiration in ingredients from the kitchen, creating a harmonious relationship between what’s being served on the plates and in the glasses. Inventive garnishes follow a no-waste sensibility by utilizing kitchen leftovers or ingredients found in the cocktails they adorn.

On the weeknds, Beatnik Country House amplifies the vibe with international DJs to light up the atmosphere and play music from every corner of the world — from Reggae and French Pop to Afrobeat, the syncopated rhythms of Brazil and the fuzzy psychedelic guitars of Turkish classic rock.

Reservations are available on Tock, and for more information, please visit http://www.casabeatnik.com/ or call +34 981-465-223.