The governments of both Gibraltar and the UK have been swift in rejecting the European Union’s draft proposals for the proposed border controls between between the EU frontier and Gibraltar.

Even before its publication, the colony´s Chief Minister, Fabian Picardo, took to Twitter to say that the proposals would not be welcomed by Gibraltar and the UK, but that the focus should be on the outcome of the talks, not on opening negotiating gambits. 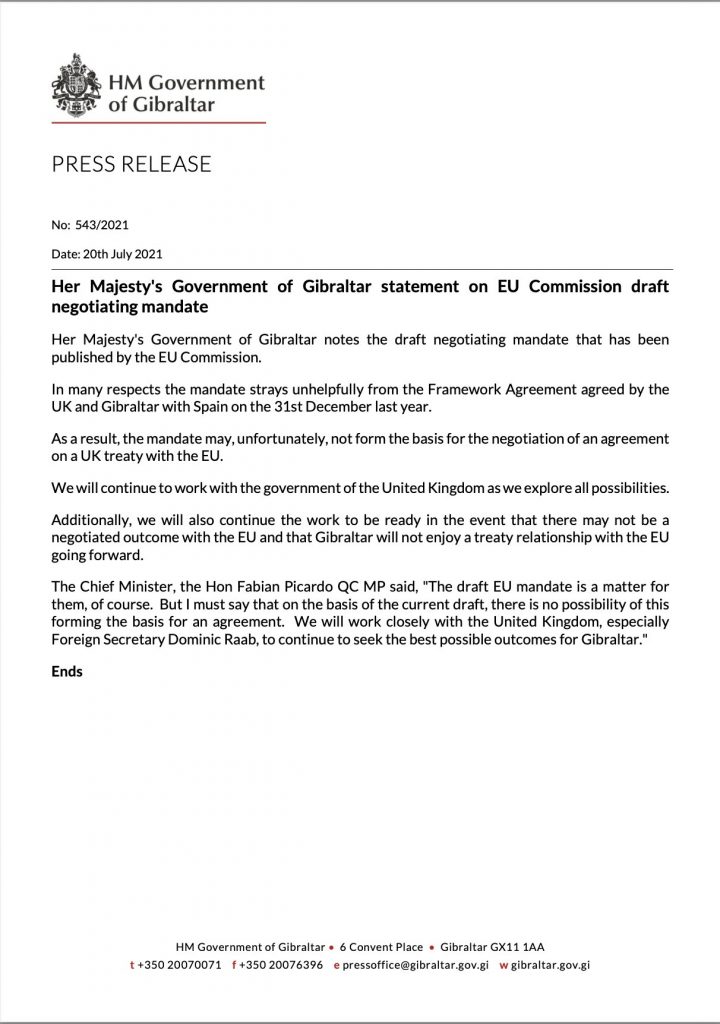 “The draft EU mandate is a matter for them, of course, but I must say that on the basis of the current draft, there is no possibility of this forming the basis for an agreement,” Mr Picardo said.

“We will work closely with the United Kingdom, especially Foreign Secretary Dominic Raab, to continue to seek the best possible outcomes for Gibraltar.”

Mr Raab met his new Spanish counterpart Jose Manuel Albares, was even starker in his message saying that the proposals ‘directly conflicts’ the Brexit agreement made on 31 December 2020, bringing the colony into the Schengen Zone, and urging the EU to “think again.”

Mr Raab said it “seeks to undermine the UK’s sovereignty” and that the UK “we have consistently showed pragmatism and flexibility in the search for arrangements that work for all sides, and we are disappointed that this has not been reciprocated.”

A particular sticking point appears to be that Spanish border officers will be tasked with border checks between Gibraltar and Spain and not the EU´s own border control agency, Frontex which had been in the initial 31 December agreement.

However the EU Vice-President Maroš Šefčovič and co-chair of the Joint Committee and Partnership Council, said: “By putting forward this draft mandate, we are honouring the political commitment we made to Spain to start the negotiations of a separate agreement between the EU and the UK on Gibraltar.”

“This is a detailed mandate, which aims to have a positive impact for those living and working on either side of the border between Spain and Gibraltar, while protecting the integrity of the Schengen Area and the Single Market.”

“It is about cooperation in the region. It is not about sovereignty or jurisdiction.”

Both the UK and Gibraltar reject that view saying: “It seeks to undermine the UK’s sovereignty over Gibraltar, and cannot form a basis for negotiations.”