The worlds largest mega-yacht with its three onboard swimming pools, helipad and an estimated value of EUR 400 million has anchored in South-Eastern Spain.

The megayacht known simply as Yacht ‘A’ is currently anchored in the city of Cartagena located in the province of Murcia in South-Eastern Spain.

The yacht, which has become somewhat of a tourist attraction, was built in Germany, designed in France and sails under a Bermuda flag.

Yacht ‘A’ boasts a record-breaking length of 143 meters (469 feet) and an eye-watering price tag of EUR 400 million, with luxuries such as an onboard nightclub, three swimming pools and an underwater observation pod.

The Russian oligarch owner of yacht ‘A’, Andrey Melnichenko,48, has an estimated worth of US 15.8 billion.

The ship was manufactured by an international team of experts from Spain, Britain, Germany and the United States specifically at the Oligarchs request.

The ship is one of a kind not just in size and value but also thanks to its state of the art navigation technology diesel-electric propulsion systems and its freestanding masts which are the tallest in the world.

The interior of Yacht ‘A’ remains a mystery. 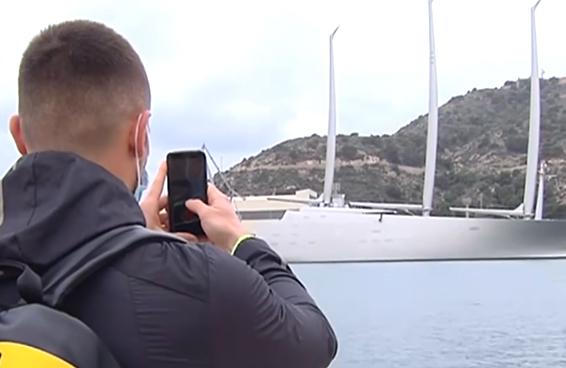 Very few people have ever been aboard the ship and even personnel working on repairs are required to sign contracts guaranteeing they don’t take photographs inside.

Despite the lack of information, it is reported that the yacht accommodates 20 guests and 54 crew within its bulletproof shell which houses eight-floors with an undisclosed number of luxury cabins.

Yacht ‘A’ is going to remain in Cartagena for several months whilst repairs are carried out.

CLICK HERE FOR MORE NEWS FROM MURCIA AND ALICANTE