A Saharan dust storm over the Canary Islands has made the air quality among the world’s worst leading to health concerns and causing as many as 16 flights to be cancelled.

The air conditions on the Spanish autonomous community of the Canary Islands have been caused by a meteorological phenomenon locally known as ‘calima’ which has been seriously affecting the region since yesterday (16 February). 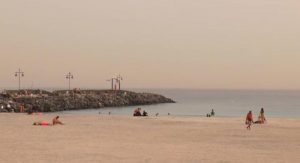 Calimas are large dust storms coming in from the Sahara in northern Africa originating from strong winds which push dust particles towards the islands.

The Canary Islands, which consist of eight main islands, reportedly started to suffer the storm’s peak effects yesterday causing as many as 16 flights to be cancelled so far.

The storm is expected to continue to peak throughout today (17 February) and its effects are expected to be felt in the region until 19th February.

According to a ranking of the Air Quality Index, the meteorological phenomenon made the air quality in the Canary Islands one of the worst in the world.

Officials have asked local residents to remain indoors as the dust particles can enter the respiratory system which can dry airways or worsen pre-existing conditions such as asthma.

The warning comes due to the high levels of PM2.5 and PM10 particles, compounds which vary between 2.5 and 10 micrometres in diameter.

According to the newspaper Canarias7, an incredible 900 micrograms of PM10 particles per cubic metres were reported in the south of Gran Canaria, which was the hardest-hit yesterday (16 February). (https://bit.ly/3diqN84)

The same report added that a PM10 concentration of 602 micrograms per cubic metre was seen at the popular beach of Playa del Ingles, and concentrations of over 500 in Aguimes, Jinamar and San Agustin were also reported.

The resort island of Tenerife and the city of Arrecife on the island of Lanzarote were much less affected reporting PM10 concentrations of about 240 micrograms per cubic metre.