A Spanish medieval alleyway is believed to be the narrowest public street in the world, and residents of the tiny Castilian town of Urries are trying to get it listed in the Guinness World Records. 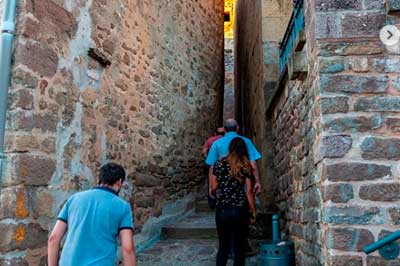 However, Spreuerhofstrasse leads to a private property, so residents of Urries, which is located in the northern province of Zaragoza, are trying to get the Callejon de Urries (Urries Alley) listed as the world’s narrowest public street.

A Callejon is known in English as a cul-de-sac.

The 25 meters (82 feet) long alleyway starts from the town’s main square and runs alongside the Church of San Esteban (St Stephen), which dates from the 12th and 13th centuries.

It was closed for 25 years in the 20th century for hygiene reasons. It opened again to the public in 1955. However, pedestrians must enter one-by-one, as it is physically impossible for two people to cross each other in the passage.

Armando Soria, the mayor of Urries, which has a population of just 40, has been trying for some years to get the street into the Guinness World Records. However, he has not heard back from the organisation.

If it enters the book, it will be listed above Exeter’s Parliament Street and Prague’s Vinarna Certovka, which are 64 centimeters (25 inches) wide at their narrowest point.