Analysis has confirmed the presence of faecal E-coli bacteria along a beach on the Spanish island of Mallorca, which has now been closed until further notice.

The unsavoury discovery was made along 400 metres (1,312 feet ) of the beach of Muro, on the northeastern coast of the island of Mallorca, in the autonomous community of the Balearic Islands off the eastern coast of Spain.

The town council of Muro posted on their official Twitter account to advise that bathing on the beach is prohibited on 19th August since “it has been detected that the water conditions are not optimal from a sanitary point of view”. 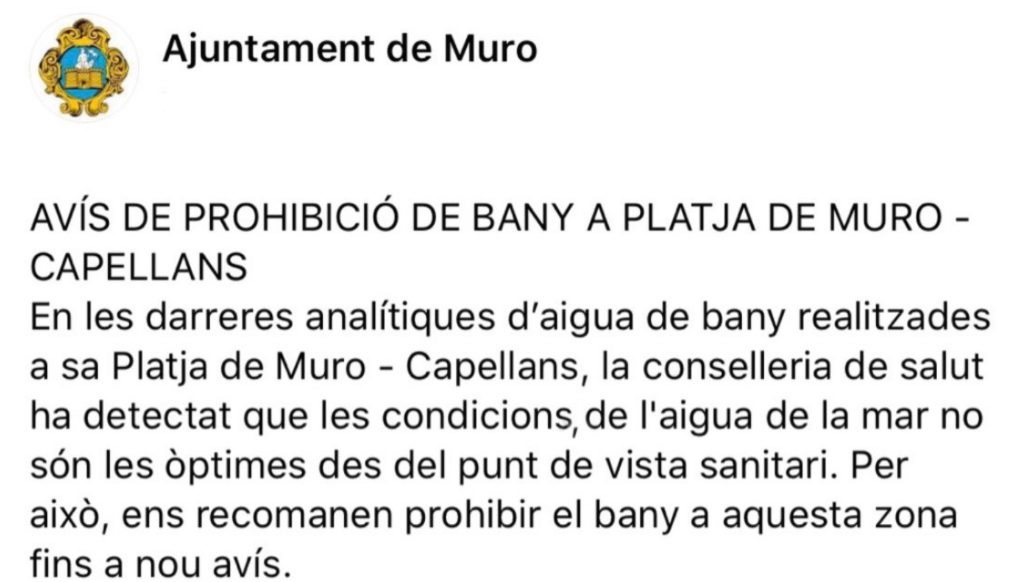 According to information from the local newspaper Diario de Mallorca, the presence of the bacteria was detected in one of the periodic analyses carried out by the health department on the beaches of the archipelago to ensure the quality of the water.

The town council immediately commissioned a counter-analysis to corroborate the results and declared the closing of the beach.

According to statements collected by Diario de Mallorca from the Mayor of Muro, Antoni Serra, the origin of the bacteria is unknown.

Taking into account that in the area there are no large constructions that could be the origin of the spill, the most considered hypothesis is that a ship passed through the area and flushed out the excrement.

The beach will remain closed until it is confirmed that the water quality is again optimal for swimming.

E-coli (Escherichia coli) is a bacteria normally found in the intestines of humans and other animals mainly transmitted orally, by ingesting contaminated food or water.

Among other conditions, the ingestion of the bacteria can cause urinary tract infection, gastroenteritis, meningitis, or respiratory infections.

The bacteria has been detected this summer in several points of Spain such as on the island of Tenerife in the Canary Islands, southern Spain where the Bajamar beach was closed for several days in July due to the high levels of the bacteria detected.

In addition, high levels of the bacteria were detected on various beaches in the autonomous community of Galicia, although none of them were closed and the concentration of the bacteria did not cross the maximum figure allowed.

The term for the mixture of urine, faeces and flush water along with dry cleansing materials is known as blackwater, and it contains the pathogens of faeces. The problem of untreated black water from ships being pumped straight into the sea is an issue which is adversely affecting many beaches all over Spain and its islands.

Spain is also facing some of the largest fines in history from an EU tribunal for failing to treat wastewater, with accumulated fines of at least 46.5 million GBP (42 million GBP), which will continue to rise until action is taken.

Five years have passed since the initial court hearing and according to a recent article from Euro Weekly News, at least 17 towns and villages of over 15,000 inhabitants are yet to solve the issue.