Black Lives Matter protestors have launched a campaign for this Spanish chocolate brand to be removed from the market because of its logo of a cartoon figure which caricatures black people’s physical features.

Online Black Lives Matter protesters have launched the campaign on Change.org where it has already been signed by more than 5,000 people.

The campaign, launched by a profile called ‘Black Lives Matter’ criticises the chocolate brand ‘Conguitos’ for its logo, a black cartoon figure with red thick lips.

The word ‘conguito’ in Spanish is a term for somebody from the Congo. 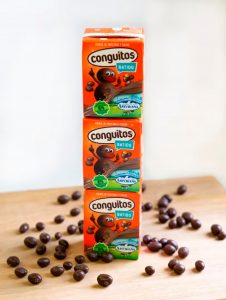 ‘Black Lives Matter’ said on Change.org: “The term ‘Conguitos’ as the caricature of a black man with big red lips makes this snack a product that stigmatises black people.

“The Lacasa group kept selling these chocolates without removing the racist features of its product marketing.

“That is why we believe that it is time to think how this cultural racism, which we should all fight, has stuck to our DNA unconsciously.”

The sweets are produced by the company Lacasa S.A, also known as Los Chocolates Lacasa, founded by the Lacasa family in the Spanish city of Jaca in the province of Huesca in northeastern Spain in 1852.

According to Chocolates Lacasa, the logo was inspired by the image of “black people carrying spears.”

Despite having been signed by over 5,000 people, some netizens have also criticised the campaign.

Netizen ‘David Mariblanca Sanchez’ wrote on ‘Change.org’: “You only have enough intelligence to avoid sh*tting on yourself. There are black and white Conguitos. If you think we are going to allow you to continue with this nonsense you are f*cking wrong.”

Lacasa S.A has reportedly become one of Europe’s leading confectioners with marketing offices and factories in Argentina, Belgium, France, Portugal, Spain and the United States.