This shocking footage shows lambs being having their throats slit without being stunned, a horse being stabbed in the neck and cows being beaten in a Spanish slaughterhouse.

The shocking images were shared by the NGO Equalia and were reportedly recorded in a municipal slaughterhouse in Caudete, in the south-central Spanish province of Albacete in the Castilla La Mancha region.

In the footage, lambs can be seen being bled seemingly without having been stunned beforehand. The animals can be seen thrashing as they hang upside down and are bleeding.

The clip also shows a cow being beaten with metal sticks before a horse is placed into the stunning area and has a huge wound punctured into its neck, with the animal kicking and thrashing as it bleeds to death. 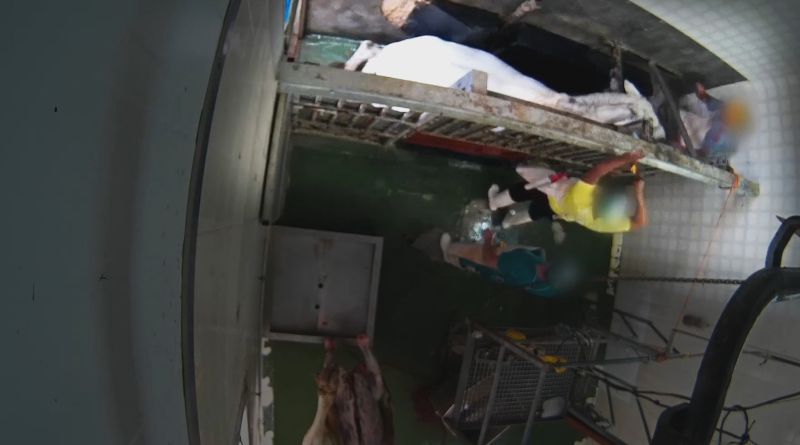 Equalia, which fights for animal rights, say the images were recorded in the Caudete slaughterhouse, which is managed by a private company, this year.

Guillermo Moreno, General Director of Equalia, told Central European News (CEN): “This is part of a campaign we are doing this year to ask the authorities to install CCTV cameras inside the slaughterhouse in order to prevent situations like this where a case of animal abuse is clearly seen.

“It is against the law, for example, to kill the lambs before them being stunned”.

The video was shared by the organisation today (Tuesday) as it is International Animal Rights Day.

Morena added to CEN: “We saw irregularities with animal welfare. The facilities are very old, and it is seen, for example, how the horse cannot fit in the stunning box and the workers had to tie it in the box. In another moment, a cow can even be seen being hit in the eye.”

Equalia said that major brands such as Carrefour and El Pozo Alimentacion have asked for CCTV cameras to be installed in slaughterhouses to be sure the products they are selling do not come from abused animals.

The organisation is asking for CCTV cameras to become necessary by law.