This is the moment an angry suspected shoplifter tries to run over a shop worker with a pram after dumping the allegedly stolen items on the floor in Spain.

The incident took place in a supermarket of the popular Spanish chain Mercadona in the town of Cerdanyola del Valles, in Barcelona, in the eastern Spanish region of Catalonia and was recorded by a stunned witness in the queue.

In the video, workers can be seen standing in front of a woman with a pram and a young woman who is reportedly her daughter.

The woman appears to try to leave but when a male worker stops her she pushes him. The pair, who were accused of stealing by the workers, then begin throwing products out of the pram onto the supermarket floor.

The products include a box of prawns, bottles of alcohol, wine and other foodstuffs.

One of the workers was reportedly calling the police and in the video the elder woman attacks him, pushing the pram into him and slapping him with both hands.

She then begins attacking the other workers as the other woman tries to hold her back and the tot in the pram can be heard crying. 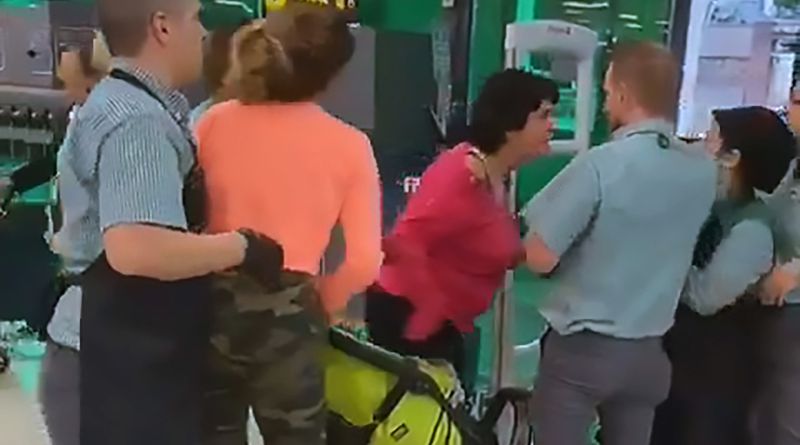 The aggression continues until the pair run away from the supermarket. Sources from Mercadona told local media that the incident had been reported to the police and nobody had been injured.

It is unclear if any arrests have been made.