This is the latest startling footage of the ‘tornado’ which has hit Ibiza lifting a construction hut and onlookers can be heard screaming in the incident which left three people injured.

The startling scenes were recorded by onlookers in the municipality of Sant Antoni, in the island of Ibiza, in the eastern Spanish region of the Balearic Islands on the third day of a cold front. 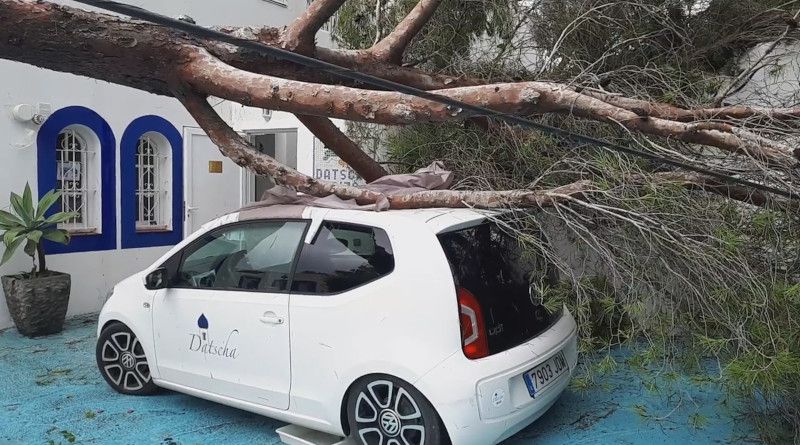 The injured trio were reportedly working at the construction site of a hotel in Cala Gracio when the strong winds lifted a hut on the site.

They were taken to the Nuestra Senora del Rosario clinic, with one of the victims in a serious condition and the other two only suffering minor injuries.

In the video, the strong winds can be seen battering the construction site and a man can be heard shouting, saying: “It was lifted up, with people inside.”

Local media reported that firefighters had to cut trees to open a path for the ambulances to take the injured people to the hospital.

The motorway linking the city with the airport was also closed due to flooding.

Other footage shows how a tree collapsed onto a car and local police in Sant Antoni reported that 200 trees had collapsed on Santa Agnes road.

The emergency services attended 48 incidents linked with the bad weather conditions and the effects of the cold front that has battered the Balearic Islands since Sunday. The most serious was the reported tornado which hit Cala Gracio.

On Tuesday, storms saw winds of around 100 kph in Ibiza where there were also heavy rains of 30 litres per square meter in only 30 minutes.

The cold front also affected the eastern Spanish region of Catalonia, where two people were reported as dead and two missing – a mother and her son whose car was dragged by floodwaters, local media report.

Firefighters and civil protection officers are working to help deal with the damages caused by the cold front.