This white Vanity Fair editor has been sacked after she allegedly posted a video on social media saying “all Chinese women look the same”.

Vanity Fair Spain have announced that their fashion director Beatriz Moreno de la Cova no longer works at the company after she posted the controversial video on her Instagram profile where she has over 15,000 followers.

In the video, which was posted to her ‘stories’, Cova, who is Spanish, reportedly said: “I’m not racist, but all Chinese women look the same to me, and black women too and white women too.”

After the video was posted, Conde Nast, the company which owns Vanity Fair, released a statement saying: “We have taken immediate action. As a company we have zero tolerance for racism and any comment which evokes racism. The published comments are offensive and indefensible. 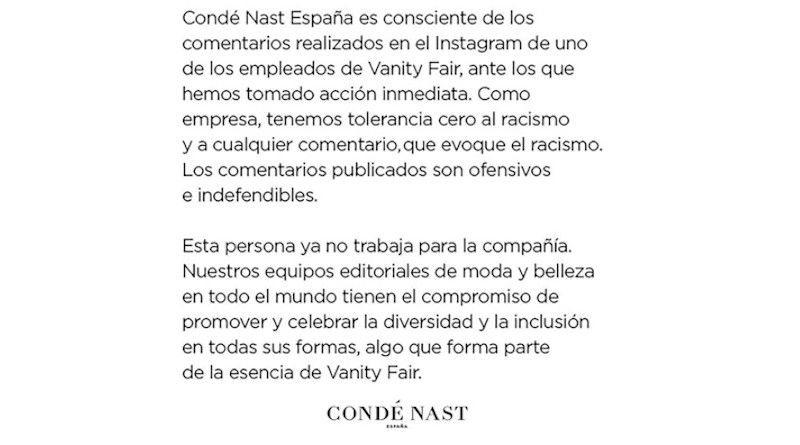 “This person no longer works for the company. Our editorial teams for fashion and beauty around the world have a commitment to promote and celebrate diversity and inclusion in all forms, something which forms part of the essence of Vanity Fair.”

Cova has not commented on the incident.

Vanity Fair Spain is one of five international editions of the American magazine currently being published. The other four are the United Kingdom, France, Italy and Mexico.

Netizen ‘lameirosan’ commented on Conde Nast’s post and said: “Such an exaggeration! We won’t even be able to call anyone beautiful because it is out of place.”

But ‘rosalbacanoyepes’ wrote: “I congratulate you for your firmness. This is how it is and must be, I’m a teacher and in art classes you will be a reference for my students.”