This is the heartwarming moment a stables owner rescues one of seven horses that were trapped in the flooded building for two days during the heavy storms that battered many regions in Spain.

The incident was filmed in the small village of Molins in the municipality of Orihuela in the south-eastern Spanish province of Alicante after the stables had been badly flooded by rainstorms.

As seen in the footage, the stables owner Juanjo approaches one horse in deep water that is up to both their shoulders.

With a dinghy nearby, Juanjo slowly leads the spooked horse out of the stables to safety.

Reports said that he was accompanied by a young boy and the pair ‘sailed’ to the stables in a dinghy to rescue the seven trapped horses there.

Juanjo said to local media: “I saw the horses had swollen bellies from presumably swallowing too much water, they had been in the flooded building for too long. 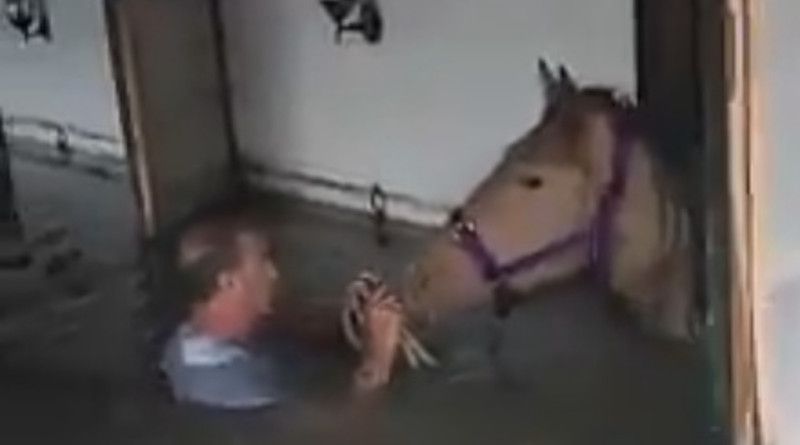 “I was the only one who could get them out as I know the place and can find things better than anyone.”

According to Juanjo, it took 10 hours to rescue the seven stressed horses from the submerged stables.

He said: “They could not breathe and they were moving their heads up and down, I tried to calm them down.”

His young unnamed helper said: “As the animals were so heavy it was almost impossible. I had to help Juanjo push them from behind.”

Heavy storms have caused widespread floods in many areas of Spain and reports said that more are expected over the weekend.