This footage shows a street in a Spanish town being flooded following a hailstorm after the country was battered last week with floods and freak weather events.

According to reports, two hailstorms battered the municipality of Vilafranca in the region of Alt Maestrat, a tourist hotspot in the province of Castellon in the eastern Spanish autonomous community of Valencia.

The hailstorms blanketed the streets and fields white, giving the Spanish tourist area a wintery feel in September.

Reports said that over 70 litres of water and hail fell during two downpours on 18th September.

According to local media, the first storm occurred without incident, but the second caused flash floods and the emergency services were called to remove water from affected areas. 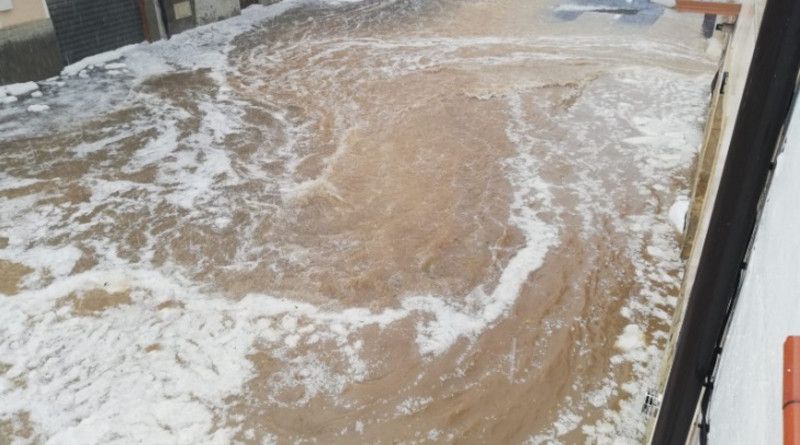 Local mayor Silvia Colom said: “During the first downpour of hailstones, snowploughs were sent to prevent the situation from worsening.

“During the second storm, hailstones and fallen leaves blocked the sewer system so that the excess water could not drain away.”

The incident caused power cuts and the loss of telephone lines, although no one was reported as injured, according to local media.

The hailstones followed a period of heavy storms that battered the south-eastern provinces of Valencia and Alicante last week.

Reports said that 250 litres of water per square kilometre were recorded in a 24-hour period while winds reached speeds of 76 kph (47 mph).

In one video clip, two cars are seen tumbling down an incline and bobbing along the flooded Bosquet Ravine in the municipality of Moixent in Valencia Province.

Earlier this week, the northern Spanish city of Valladolid saw 34 litres of water per square metre fall in a one-hour period while 132 incidents were registered by the city’s emergency services.