This is the moment an exhausted horse collapses in the centre of Seville while pulling a tourist carriage and its owners appear to try to force the poor creature to carry on. 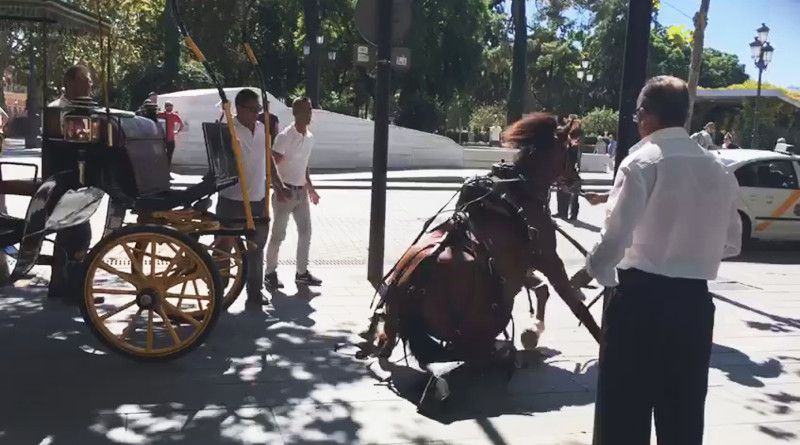 The incident took place in Seville in the southern Spanish region of Andalusia while the horse was being used to transport tourists around the city’s landmarks.

It is believed the horse collapsed on the roadside of exhaustion.

The footage shows the horse lying on the ground, apparently unable to get to its feet.

A nearby woman is heard saying: “Do not beat it, I will report you.”

According to a spokesperson for the Spanish political party ‘Animalist Party against Mistreatment of Animals’: “The horse collapses through exhaustion and its owners were reprimanded by onlookers for their behaviour instead of anyone worrying about its condition.

“How long do we have to wait until this activity is regulated properly?”

The spokesperson claimed that the horses are “tied to the carriage from 8am to 10pm” and “the city council is not regulating those hours, they are left to be exploited”:

However, the unnamed horse owner said: “It was not exhaustion, it was because the ground was slippery.”

He also claimed that each carriage is operated by three or four horses carrying out shifts.

Netizen ‘Gloria Duran Gomez’ said: “They attached the horse to the carriage again? That is murder.”

‘Antonia Garcia Martinez’ wrote: “How awful they tied it up again to make it continue. They should be reported for animal abuse.”