This is the moment divers unearth two of eleven cavalry swords from the Napoleonic period that have been found on the seabed in the Spanish Balearic Islands.

The incident was filmed off the coast of Formentera in the eastern Spanish region of the Balearic Islands and shows divers from the Guardia Civil Group of Underwater Activities unearthing two swords.

The first of the 11 sabres, a type of backsword with a curved blade associated with the light cavalry of the early modern and Napoleonic periods, was found by chance on 15th August by ship captain Manel Guasch.

Guasch told Central European News (CEN): “I was sailing with my family and a friend when he dove into the water to retrieve something from the vessel that had fallen in.

“When he surfaced with a sword in his hand, we thought it was some kind of joke!” 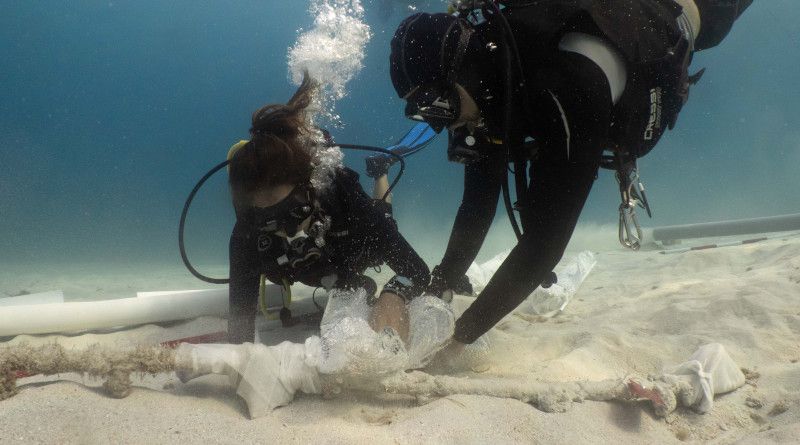 Guasch handed the artefact over to the local authorities and members from the Balearics Institute for the Study of Marine Archaeology (Ibeam) asked for the exact coordinates to carry out an expedition at the scene.

Benjamin Costa, director of the Archaeological Museum of Ibiza and Formentera, described the find as “exceptional” after carrying out X-rays and confirming that the metal “intact” sabres are in their scabbards.

According to local media, the site is under guard until mid-October when an archaeological team will try to find the wreckage of the vessel the sabres would have been transported in.

Ibeam project director and underwater archaeologist Javier Rodriguez said that the 11 swords “could be of French or Spanish origin, but they can only be researched after they have been restored”.

Rodriguez told CEN: “It is a significant archaeological find as there have not been many in the area and it will allow us to find out more about their history and context.”

A spokesperson for the Archaeological Museum of Ibiza and Formentera said that the restoration process could take up to a year.