This footage shows around 40 boats were filmed anchored side-by-side in a protected area on the Costa Brava throwing a huge party in a stunt that has sparked fury among environmentalists.

The partygoers met on Saturday in the Massoni cove, in Mont-ras, and Banyera de la Russa, both of them in the protected area of Cap Roig, in Girona province, in the eastern Spanish region of Catalonia.

The ecological organisation Salvem el Golfet has now said the parties are “inadmissible” as they have “a serious impact on the deep sea” and said that the area where the boats were anchored has maximum environmental protection. 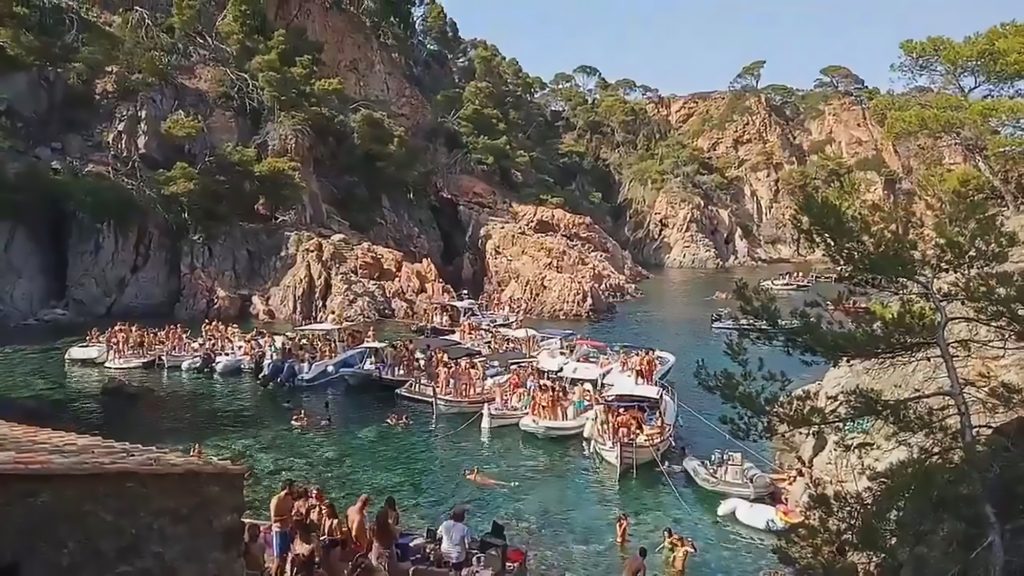 According to the organisation, the parties are organised on Instagram where participants shared images of the party with that hashtag.

The most-recent party saw revellers asked to go to the protected area “to have a good party and bring a lot of gin and tonic”.

The organisation also reported that the captains of the boats were requested to carry ropes and other things to the area, with the ecologists saying “there is no respect for the environment and the sea floor”.

Salvem el Golfet say this is not the first party of this nature, with the sixth edition of the “Paella Party” taking place on 13th July with 200 participants.

In July 2018, three days after a party the organisation presented documents to the city council of Palafrugel and Mont-ras to report that the boats do not respect the distance to anchor and the damages the waste generated there could cause.

The asked for buoys to be placed around the coves to prevent so many boats entering them, helping preserve the ocean floor.

The Sub-delegation of the Government of Girona announced an agreement with the aforementioned city councils to put a line of buoys to allow the intervention of Civil Guard if “the mass of boats in the protected perimeter of the natural place of Castell-Cap Roig is repeated”.

Local media report sources from the organisers of the parties said that these kinds of parties have been thrown for at least seven years and that some of the partygoers are the children of important businessmen in the Catalonia region.

The city council have reportedly given the case to the Spanish Civil Guard to start an investigation.

No arrests have been reported.