This photo shows a migrant woman found dehydrated and exhausted in a suitcase in the boot of a car – driven by a woman who has since been arrested – on a boat coming to Spain from Morocco.

The woman was found in a car which had been travelling from Nador, in Morocco, to the port of Almeria, in the south-eastern Spanish province of the same name in the Andalusia region, on the boat Volcan de Tijarafe. 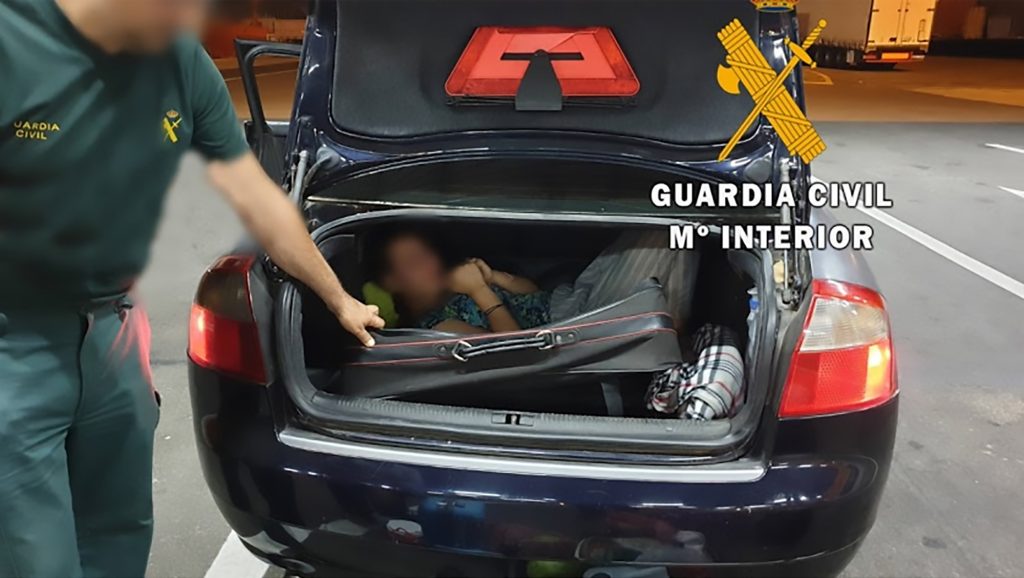 A spokesman for the Spanish Civil Guard said officers had been carrying out routine checks at the port when they spotted the heavy luggage in the boot of the car.

When they opened the suitcase to check what was inside they found a woman with clear signs of exhaustion and dehydration.

The officers checked the health of the woman, who was unable to stand properly, before calling an ambulance and she was treated by paramedics.

Once the woman was out of danger, the officers started an investigation in order to find out the identity of the female driver and the woman inside the suitcase. The driver, identified only by the initials N. K., and whose nationality was not revealed, was arrested for a crime against the rights of foreign citizens.

So far this year, officers from the Spanish Civil Guard in Almeria have found 98 people hidden among inside luggage, in vehicles, or jumping into the water off boats coming from northern Africa, among them five minors.

Local media report the Spanish Civil Guard make an increased effort to try to detect stowaways in the summer season as there is an increase in the number of people travelling from Spain and northern Africa and vice versa.

It is unclear what happened with the woman who was found inside the luggage.