Spanish authorities have dismantled a criminal gang selling illegal stuffed animals including elephants and lions in raids across the country which also saw 104 weapons seized.

The police operation, named Loxodonta, took place in the Spanish capital Madrid, Navarra in northern Spain, Catalonia in eastern Spain and in the Balearic Islands. 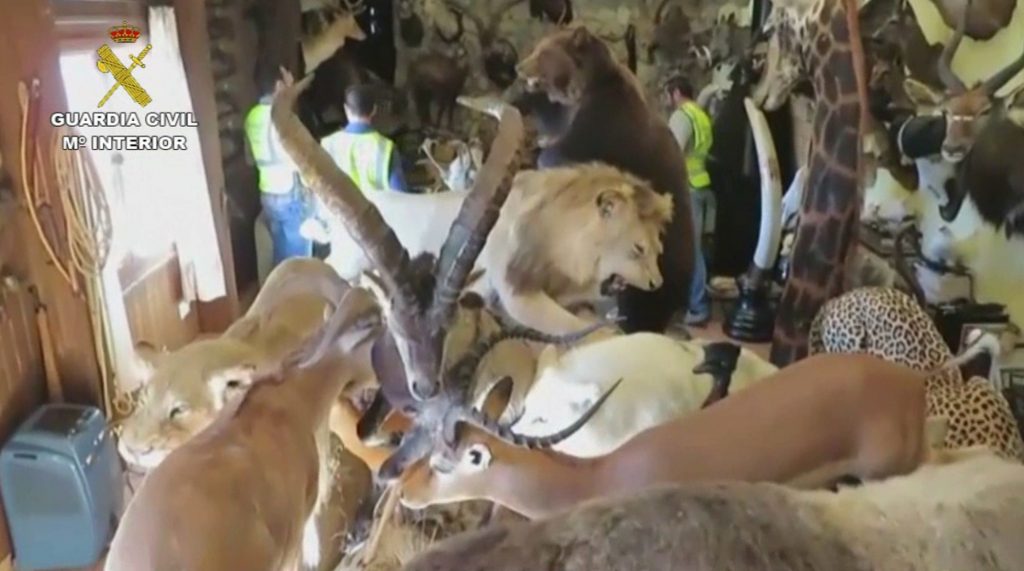 In the images, dozens of stuffed hunting trophies can be seen in a room, with the heads of bison and deer adorning the walls.

A SEPRONA officer can be seen stood next to a bear whilst the body of a crocodile is on the ground in a raid which took part in the first phase of the operation in January 2018.

In images taken in the most recent raids, huge elephant tusks can be seen along with elephant legs which appear to have been made into stools.

Official sources also confirmed the weapons seen in the video were also seized.

A spokesperson for the Spanish Civil Guard told Central European News (CEN): “Ninety pieces were seized in the second phase of the operation, 70 of them were registered as illegally sourced (according to the judge investigating the case) and the other 20 were legally sourced.”

In Madrid, officers were investigating a person believed to have been working as an intermediary in the illegal sales of the stuffed animals. In Spain it is illegal to sell stuffed animals from hunting.

The elephant pieces were seized in Navarra whilst in Lleida, in Catalonia, a taxidermist was identified with 20 animals he is suspected of having bought from the main suspect, a resident in Majorca, eastern Spain.

The suspect, who has not been, is believed to have been responsible for selling the illegal stuffed animals on the black market for around 200,000 EUR (171,936 GBP).

The Civil Guard spokesperson confirmed to CEN that the case is ongoing.