This is the moment an artist daubs a dove in red paint onto the tombstone of
Spanish dictator Francisco Franco along with the words “for freedom” before
being stopped.

Local media report the incident happened at around 11am when approximately
20 people were visiting the controversial monument to Franco.

In the video, Tenreiro can be seen standing at the tombstone when he
suddenly clears it of flowers and begins daubing red paint over it.

Security guards can be seen looking for backup as Tenreiro continues
painting a red dove onto the tombstone.

A security guard eventually grabs the artist who can be heard saying: “For
freedom and for the reconciliation of all Spaniards. I don’t have anything
against Franco.” 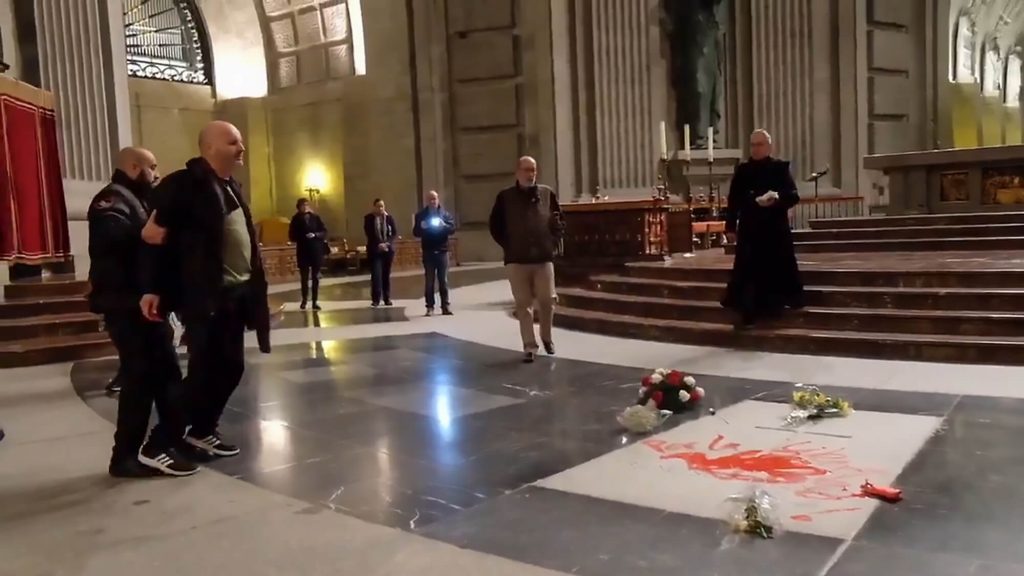 Spanish newspaper El Pais report that Spanish Civil Guard authorities
confirmed that Tenreiro had not been arrested for the stunt.

A Civil Guard spokesperson said: “He is free, he was never arrested. We
should evaluate the damage to the grave and check if this was a hate crime
and then he will be called to give a statement.”

Images of the tombstone show Tenreiro painted a red dove with the words ‘por
la libertad’ (for freedom) above it. 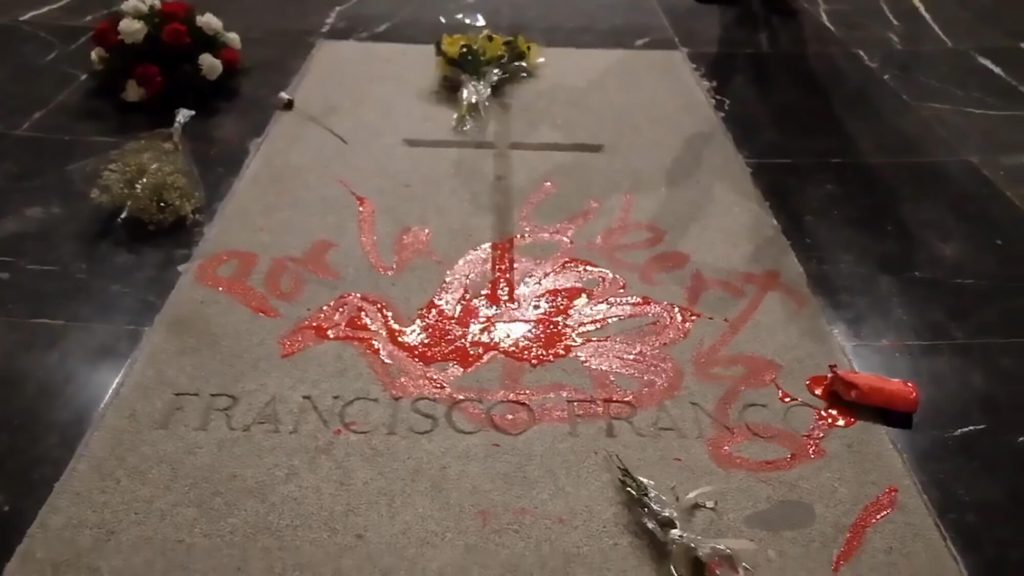 Pedro Maestre, who recorded the incident, said: “He decided to carry out the
artistic action of painting a dove of peace on Franco’s tombstone.”

Maestre says he reached an agreement with Tenreiro outside the monument the
day before to record the incident, and Tenreiro reportedly said: “I do not
want to hurt his (Franco’s) family or his followers, what I want is a space
of freedom.”

Tenreiro said his stunt “is a small grain of sand to relieve the pain of
those who lost loved ones to the Civil Guard which should never have
happened. I have grandparents who were involved in both sides (of the
Spanish Civil War) and I have the idea that this will help close the wound
that a lot of people keep in their heart”.

He had reportedly smuggled the paint into the monument in a plastic holder
so security systems could not detect it.

Reports suggest the tombstone was later covered in a white sheet to cover
the paint.

The stunt comes in the middle of a debate in Spanish society over the
possible transfer of Franco’s remains to the La Almudena cathedral in
central Madrid, as his relatives want.

The Spanish government has opposed the transfer as they believe it could
turn the cathedral into a place where Franco’s supporters go to worship him.