This is the moment a middle-aged woman on a bus calls a young Muslim a
“terrorist” and asks her where her “bombs” are because she is wearing a
hijab and the row quickly escalates.

The verbal abuse was filmed on a bus in Gran Canaria, one of the seven
Spanish Canary Islands situated just off the north-western coast of Africa.

During the heated exchange, the middle-aged woman calls the Muslim passenger
a “terrorist” and tells her that she should not be wearing her “burka”,
which is actually a hijab headscarf. 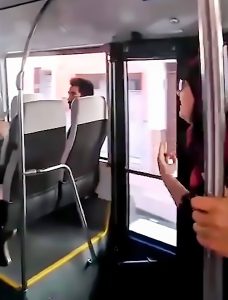 The older woman then calls her a “moor”, to which the younger woman replies:
“And proud of it, a pretty Moorish woman and proud!” 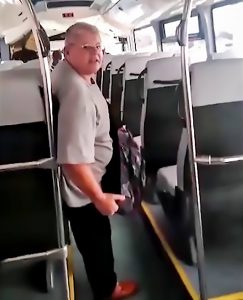 The middle-aged woman then says “this is not your country”, to which the
Muslim woman responds in perfect Spanish that she was born in the Canary
Islands and that it is indeed her country.

The racist woman then says: “In the Canaries we do not wear the burka.” The
young woman in the headscarf answers that the other woman should respect her
religion.

The Muslim woman replies: “Who should I f*ck?”

The woman repeats: “Your mother!”

After a short exchange, the Muslim screams: “Shut up, racist.”

The Muslim woman answers back: “You called me a terrorist, now I am going to
put a bomb up your a*se.”

Then racist woman exclaims “in my own country” and then asks the Muslim
“where are your bombs?”

The video ends with the Muslim woman saying: “Shut up racist!”

The footage was filmed by a bus passenger and uploaded to social media where
it has been widely circulated.

Netizen ‘Ramon Ortega’ said: “It is more ignorance than racism what is
happening in this country. Islam is a part of Spanish history, whether we
like it or not, it around for 800 years,” apparently referring to Islam
being established in the country for 800 years prior to the fall of the last
Caliphate (Granada) in 1492 to Queen Isabella’s forces.

But ‘Al Al’ said: “All my support to the local woman. Spain is a Christian
culture that cannot give space to those who want to force their culture.
Europe is Christian.”

However ‘TheDrakpunt’ said: “The old woman starts insulting her without any
reason, saying she is an invader and that she is a terrorist. Besides, the
woman can have the religion she wants and the burka or hijab can be worn as
well. I wear other clothes when I go out of my house. It is bullsh*t that
the old woman is saying how we should dress.”

It is unclear whether the incident is being investigated by the local
authorities. There are other passengers on the bus but none seemed to want
to intervene. It is unclear what happened after the video ends. The names of
the people in the footage are unknown.