This is the moment an angry lorry driver attacks cyclists with a hammer
after they criticised his driving and asked him if he was crazy.

Two cyclists berated the lorry driver after he reportedly nearly ran them
off the road near the city of Pontevedra in the north-western Spanish region
of Galicia.

But the lorry driver jumped from his cab with a hammer in his hand and
attacked the pair and their bicycles. 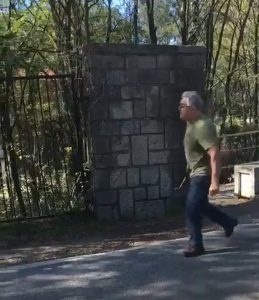 The bizarre incident was captured by an eyewitness with a smartphone on the
road from Pontevedra to the nearby town of Marin.

The footage shows the hammer-wielding lorry driver run after one cyclist who
manages to run out of his way.

He then walks back to his lorry, kicking the man’s bicycle, which had been
left lying on the ground, before throwing it into bushes. 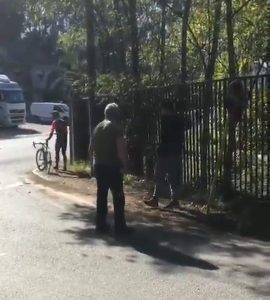 The lorry driver then confronts the second cyclist as he picks up his own
bicycle from the ground, and swings his hammer at him, apparently landing a
number of blows as the cyclist yells in pain.

This cyclist also beats a hasty retreat while the lorry driver is seen
walking menacingly after him, still clutching his hammer.

One of the cyclists, named as Delfin Santiago Macias, is said to have needed
treatment for concussion and a shoulder injury in the city’s Hospital
Montecelo.

His friend, Angel Iglesias, said the incident started after the lorry driver
overtook them at speed.

Mr Iglesias said: “It’s an old road and there are lot of potholes and a dog
which always attacks cyclists. The lorry went past too fast and much too
close.

“I approached the lorry driver and asked if he was crazy, then he came out
of his cab with a hammer in his hand.”

Mr Macias added: “I didn’t even say anything, I was too scared. I don’t want
to imagine what would have happened if I had not been wearing a helmet”.

“After hitting me, he kept on chasing me, threatening to kill me, when I was
only taking my bike away so that he could not kick it like his did with my
mate’s bike.

“I’ve never had problems with people when I ride my bike before, apart from
falling off when I was on my own. It’ll be some time before I can go out
again with my bike as I’m too scared.”

Police have launched an investigation into the incident. Officers are
believed to be studying the CCTV footage in a bid to identify to lorry
driver.