This is the moment a kindhearted restaurant manager and his waiters are
attacked by homeless people when they stop giving them free food at the end
of the day.

The gang had grown accustomed to being given the leftovers at the restaurant
in the popular seafront neighbourhood of Barceloneta in the city of
Barcelona in Spain.

The manager decided to stop encouraging the young men when one of them was
accused of stealing a bag from one of his waiters.

The incident was caught on CCTV camera and shows the restaurant manager
having an argument with one of the young men wearing a black cap, who
suddenly punches him in the face. 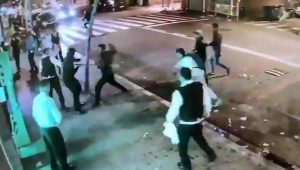 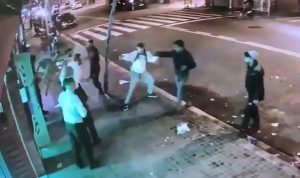 In that moment, one of the waiters approaches the attacker to calm the
situation but ends up being attacked as well.

While the other young men try to stop their friend from continuing the fight
he manages to hit another waiter.

When the situation escalates, the restaurant manager is seen getting a
wooden plank along with another waiter trying to fight back.

But then, all of the thugs get involved in the fight as someone from the
restaurant throws a chair towards them. The thugs then manage to take the
planks and the chairs and use them against the restaurant staff before
running away.

Reportedly, the young men are known to be involved in fights and violent
robberies.

According to a restaurant worker, they visit the restaurant daily in order
to ask for the food leftovers.

An unnamed waiter said: “In the afternoon they stole a bag from one of the
waiters that only carried a pen and a dirty shirt. We got angry and decided
not to give them food. When we refused, the fight started.”

The police have opened an investigation.