These were the  scenes as flash floods hit a popular tourist city where
water surged through a mountain gorge, creating a new waterfall and damaging
historic baths.

Eyewitnesses with smartphones filmed the devastation caused by the floods in
the city of Ronda in southern Spain’s Malaga province.

Water was seen surging through the gorge which divides the town, under the
spectacular Puente Nuevo, where the floods turned the Guadalevín River into
a raging torrent. 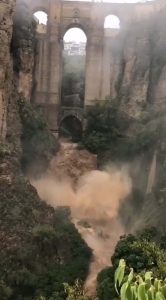 Nearby, water fell hundreds of feet down sheer cliffs as the floods created
a new waterfall in the stunningly beautiful city.

Down below, the river burst its banks, bringing down trees and a huge
section of stone wall that had been erected to protect the riverbank. 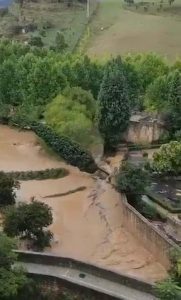 A wall of the city’s historic Arab Baths, one of its most popular tourist
attractions, also collapsed as eyewitnesses are heard shouting in shock.

The Arab Baths of Ronda, which date back to the 13th century, are the best
preserved in Spain. Officials have so far been unable to put a figure on the
damage caused.

Damage was also caused to the area’s natural attractions including the
famous El Tajo gorge through which the Guadalevin River flows.

The dramatic scenes were seen after heavy storms hit the region where a
firefighter died after his fire engine overturned on a flooded road and he
was washed away.

The army had to be drafted in after the emergency services were overrun with
435 requests for help, mostly from people trapped by the floods.

Spanish authorities have declared the situation a catastrophe and have
launched a relief operation to help deal with the situation.