Protesters on the Spanish island of Majorca have used National Tourism Day
to call for an end to mass tourism.

Members of the left-wing Committee for the Defence of the Republic (CDR)
decorated a tourist bus with slogans against the “massification of tourism,”
calling for “a return to sovereignty.” 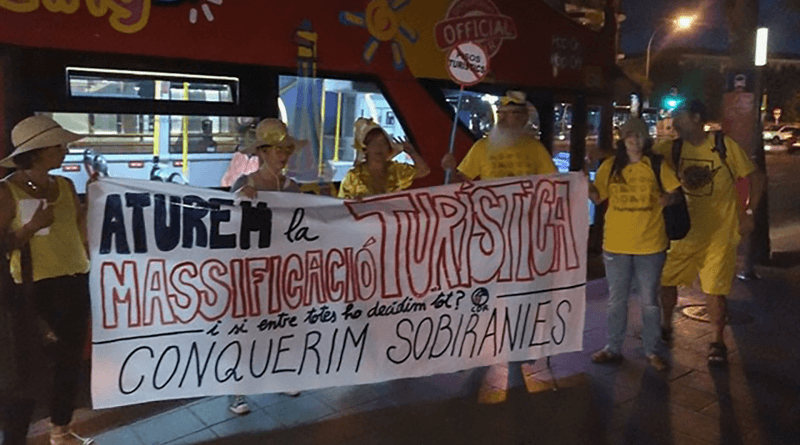 The CDR were formed to support a referendum on Catalonia’s right to vote on
a possible secession from Spain. Many consider Majorca, where a dialect of
the Catalan language is spoken, to be part of an imagined greater Catalonia.

There are also parallels between the mass tourism that is generating unrest
in Barcelona, and that of Majorca.

The CDR issued a statement that said: “Mass tourism is an economic
mono-culture that displaces all other economic activity, including
agriculture which is on the way to disappearing from the island, with the
subsequent loss of food sovereignty.”

They also denounced the complicity of local politicians with the tourist and
construction industries.

“It is no coincidence that the main funding of political parties comes from
the hotel and construction industries, and that all the great political
scandals are connected to the awarding of construction contracts.”

The CDR were echoing a growing feeling that many islanders were not really
benefitting from mass tourism on the island which has seen a backlash
against the consequences of the low cost model often centred around
alcoholic and drug-fuelled binges.

The CDR spoke of “the declining  condition of the working classes on the
island as salaries stagnate or even fall, as rents continue to rise.”

Majorca is increasingly divided on the issue of tourism, with an actual
majority recently favouring limits on the number of visitors allowed.