This is the stunning show put on by dozens of dolphins leaping out of the
water as they swim next to a boat of scientists studying them.

The amazing scenes were filmed by scientists working for the Bottlenose
Dolphin Research Institute (BDRI) on a boat 10 nautical miles off the coast
of the Cies Islands off Spain’s north-western coast in the autonomous
community of Galicia.

In the video, dozens of the common dolphins (Delphinus delphis) can be seen
leaping out of the water at the same time as the pod keeps up with the
speeding boat. 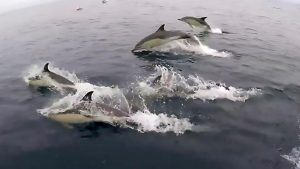 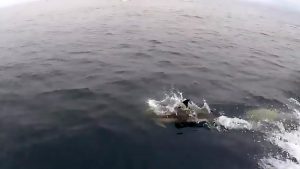 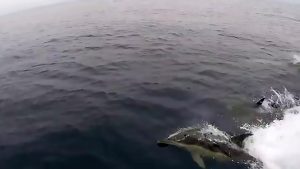 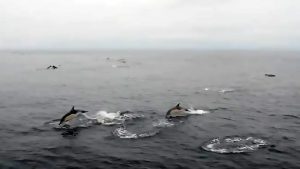 The dolphins are spread out over a huge distance as they travel alongside
the boat, jumping out of the water in an impressive show.

The animals are believed to have been swimming in a pod containing 3,000
dolphins.

Director of the BDRI Bruno Diaz Lopez told reporters: “What we did not
expect to find was some 3,000 examples together, it is almost unique at
least on the Galician and European coasts as it is more normal to see such
big groups in California and South Africa.”

The pod were reportedly swimming from the north towards the south of
Galicia’s coast.

Lopez said the dolphins’ presence was probably sue to the abundance of food
in the area.

He said: “There are clearly large fishing boats (in the area). When so much
food is concentrated huge pods form, the dolphins group together and follow
the fish and squid to feed. It is possible that the dolphins were interested
in the same pelagic fish (as the boats).”

Lopez added: “At first it looked like a large, dark wave that appeared on
the horizon, with binoculars we could confirm it was an immense line of
dolphins.”