This is the moment a bull was blasted in the head with a rifle in the middle
of a city feet from onlookers who laugh and clap as the animal collapses.

Forty seven Spanish animal rights organisations have reported the public
shooting of the bull as “illegal”. 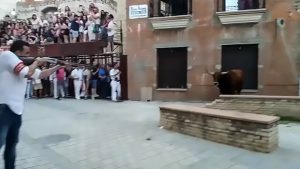 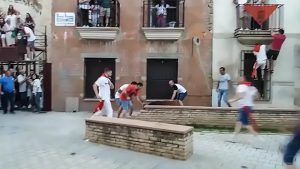 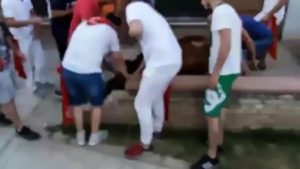 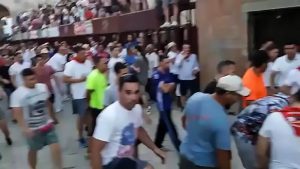 The group shared choppy footage of the bull being shot in the head by a
rifleman in front of a cheering crowd and are demanding that recent changes
to the law be adhered to.

The incident took place during the running of the bulls event at the San
Juan Festival in the city of Coria in the western Spanish province of
Caceres.

The animal rights collective ‘La Tortura No Es Cultura’ (‘Torture Is Not
Culture’) is furious that organisers continue to ignore the 2016 law change
which prohibits the public sacrifice of bulls.

A spokesperson said: “The custom continues to be carried out, and in the
same places as always.”

The group shared images of the bull shooting, which took place close to
hundreds of spectators – and even several residents watching the rifleman
from their balconies just a few feet above the bull’s position.

‘Torture Is Not Culture’ also reported organisers for an incident on 26th
June which saw minors take part in an event with four bulls which also
“contravenes” new legislation.

The group’s lawyer Jose P. Cubells said that he has denounced organisers for
“irregularities that involve animal abuse, the violation of children’s
rights and damaging the city’s image”.

In 2015, a man was gored to death by a bull at the Coria running of the
bulls event.

The bull managed to get its horn through the security railing and struck the
spectator twice.