This is the moment Marilyn Manson forces a fan to take his shirt off on
stage because it had the name of another band on netizens have slammed the
American singer over it.

The scenes were recorded from the crowd at the Download Festival in the
Spanish capital Madrid. 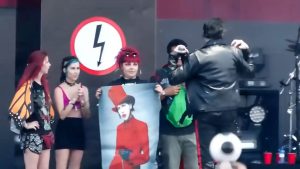 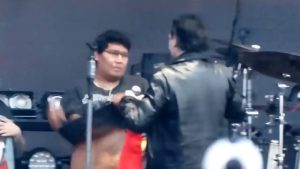 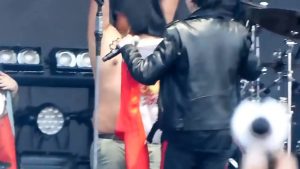 In the video, Manson – real name Brian Warner – can be seen on stage with
three female fans when a chubby male fans gets up to join them.

The male fan is carrying a Peruvian flag and wearing a black t-shirt with he
name of American heavy metal band Avenged Sevenfold on it.

Manson then says: “You should take your shirt off, it is not my band, it is
a different band.”

The fan seems confused by the instructions and Manson motions for him to
take the t-shirt off.

Manson then tells him: “You can wear the flag instead of the shirt.”

The fan puts his flag down but Manson has to explain again that he wants him
to take his shirt off, which the fan eventually does to wild cheers from the
crowd.

He then holds the Peruvian flag up to cover his body.

Netizens were not impressed by Manson’s actions, with ‘Tom Whaley’ writing:
“That made me a little sad to watch. The kid was clearly uncomfortable and
didn’t know what to do. Manson or not, it’s pretty rude for a 50-year-old
man to put that kid in that position in front of the entire audience.”

And ‘Paul Baxter’ added: “Marilyn Manson has always been a d*ck.”

Whilst ‘Sierra Brooke Robertson’ wrote: “What a douche. If this were a
female people would flip sh*t. Poor guy obviously didn’t wanna take his
shirt off in front of the whole crowd.”