This is the moment a reckless driver hangs out of the car window while
speeding along roads on the holiday island of Ibiza. 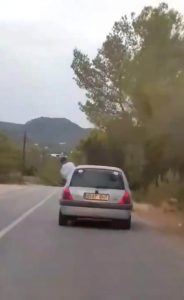 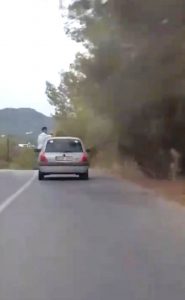 According to local media, the daredevil driver did not have either a valid
ITV certificate (Spanish equivalent of the MOT vehicle safety test) or car
insurance.

The unnamed motorist was filmed in the borough of Sant Josep in Ibiza in the
Balearic Islands.

He was driving between Cala Bassa and Cala Tarida just before 7pm, according
to reports.

The footage was filmed by the driver behind, who uploaded the footage to
social media showing the madcap motorist in a white shirt on the driver’s
window ledge with his upper body outside of the car, holding onto the roof.

Police in Ibiza were alerted to the video and traced the owner from the
vehicle’s licence plate that is seen in the footage.

The car takes several hair-raising bends before the vehicle behind gets too
close and the motorist jumps back into the driver’s seat to continue driving
normally.

Although he was hanging out of the driver’s window, it is not known if he
was steering with his legs or whether another occupant was driving the
vehicle during those moments.

According to reports, he has been charged with reckless driving, and driving
without insurance and an ITV (MOT).

Netizen ‘HaHaHa’ said: “Dash cams are great and make up for the lack of
police on the island right now. I encourage all drivers to report people
like this.”

‘ChiquitoElGrande’ wrote: “You can tell he does not give a damn so he thinks
nothing of playing with other people’s lives.”