This is the moment an endangered see turtle is fitted with a tracker device
by conservationists. 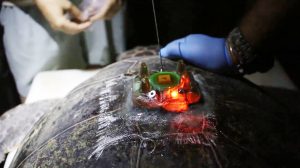 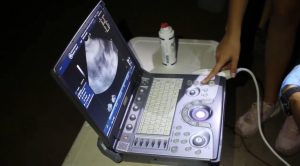 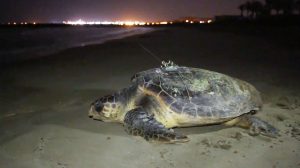 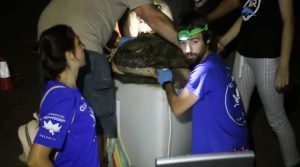 These remarkable reptiles take part in far-flung sea migrations yet still
manage to return to the exact spot where they are born to nest.

But conservationists admit that they still know too little about the
endangered species because once they have hatched, they head out to sea and
rarely return to land, except when the females come ashore to nest.

This return presents a rare opportunity for scientists to study them, and
also to fit them with tracking devices in order to understand more about
their habits in order to protect them.

Scientists need to know where the turtles migrate, where their feeding
grounds are, and where they gather to breed. With this data they can
restrict fishing activity in key areas – protect feeding grounds and also
protect access to nesting beaches.

This female sea turtle (Caretta caretta) was rescued by marine experts from
the Oceanografic Valencia and University of Valencia after she was disturbed
by children while trying to nest on the Els Terrers Beach in Benicassin in
the eastern Spanish Valencian Community.

After getting an ultrasound scan that indicated she was otherwise healthy,
she was fitted with a tracker and released back out to sea where it is hope
she will later return to once again try to lay her eggs.

Female loggerheads reach maturity at about 35 years of age. Every two or
three years they mate and then amazingly managed to find their way back to
their natal beach at night in order to lay their own eggs.

During the nesting season, which begins in April and ends in September,
loggerhead turtles lay an average of four clutches of 100 to 126 eggs.