The show of public exhibitionism took place on the holiday island of Ibiza
in the eastern Spanish Balearic Islands.

According to reports, the roundabout is located near Ibiza Airport and an
industrial estate and is used by a high number of people every day.

In footage filmed by a giggling motorist and his pal, the young men approach
the traffic island and say: “Look at this guy! Awesome!”

The topless man, who appears middle-aged, rubs his hands together as he sits
on the grass in the balmy sunshine – either to warm them up or to lubricate
them with lotion.

As the pervy man brazenly masturbates in front of motorists, the vehicle’s
driver says: “He is jerking it!” 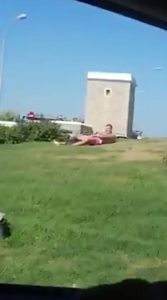 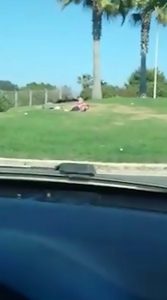 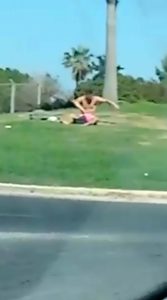 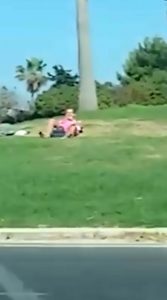 As the young men leave the roundabout, one shouts to the exhibitionist:
“Stroke it hard! Come on!”

Netizen ‘Don’ commented: “Who is going to support ‘naturism’ like this? How
can anyone say it is not a big deal when someone does that with their hairy
a*se up in the air?”

‘VidalBirth’ said: “It is just a typical day in the sun!”

‘Toniet’ wrote: “Let people be happy. I am sure all these outraged people
let their kids play violent video games all night. He was not hurting
anyone, just having fun by himself.”

It is unclear if the man has been arrested or if police are investigating.