Beachgoers were left stunned when a James Bond-style helicopter-speedboat
chase involving cops and a suspected villain unfolded before their very
eyes.

Like all good action movie plots, the cops got their man at the end and
Spanish authorities currently have him under questioning.

The location of the Hollywood-style scene was Malvina in the southern
Spanish province of Malaga. 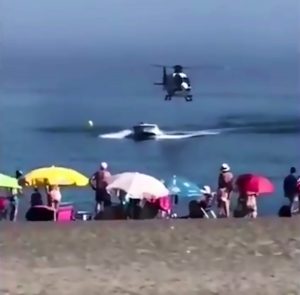 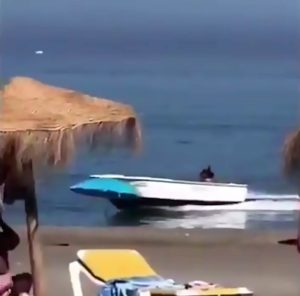 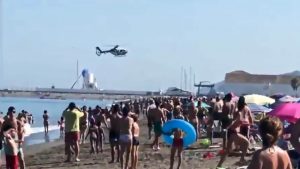 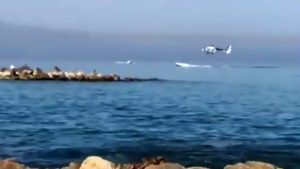 According to reports, authorities first spotted the speedboat – seen
crashing into the beach in the video – transporting fuel to a larger vessel
in the Strait of Gibraltar.

It is believed the vessel was being used for drug trafficking and was being
monitored by radar.

Authorities dispatched marine and air services to intercept the suspected
drug cargo, however the two boats split up and the powerful vessel was able
to escape to the North African coast, according to reports.

The speedboat headed for the coast of southern Spain and was pursued by a
helicopter.

Video footage shows the dramatic moment when the boat reaches a beach full
of people followed by the cop’s helicopter.

Filmed by several onlookers from different vantage points and uploaded to
social media, the helicopter is seen hovering above the speedboat as it
crashes into the shore.

At first appearing unmanned, a heavyset suspect in black suddenly runs from
the boat and heads through the thick sand for the crowded boulevard.

The helicopter team communicated with police on the ground and the suspect
was arrested shortly afterwards.

According to local media, he was stopped by an off-duty cop enjoying a day
at the beach and pinned down until arresting officers arrived.

The investigation is still ongoing.