This is the moment beachgoers help to push a beached whale back out to sea.

The incident took place on Zarautz Beach in the northern Spanish Basque
region. 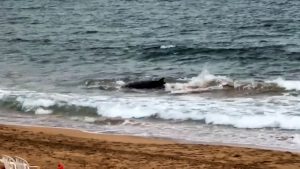 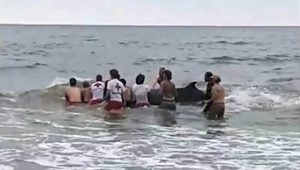 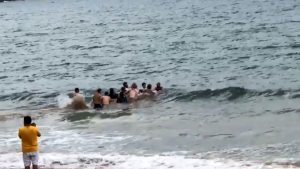 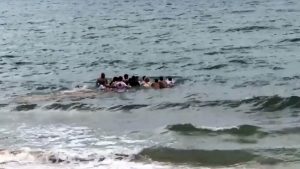 Lifeguard Marcos Laburo told local media: “I noticed the whale coming slowly
towards the shore and get into trouble.

“Two big waves pushed it further towards the shoreline and it was stuck
there in shallow water.”

Enrique Franco, vice president of the Society for the Study and Conservation
of Marine Fauna, considers the Cuvier’s beaked whale to be a “true treasure
of our seas.”

In footage of its rescue, the whale is seen floundering near the shoreline
as strong waves beat it closer to land.

A group of beachgoers, who had rushed into the water to help, are seen
alongside Red Cross workers trying to push the large mammal out to sea.

Marcos Laburo said: “In the end, we all managed to turn the whale around and
push it in the right direction. It was not an easy thing to do, it weighed a
lot!”

According to reports, despite the effort it actually only took the group of
rescuers less than 10 minutes to help the whale on its way.

Cuvier’s beaked whales are the only member of the genus Ziphius and the most
widely distributed of all the beaked whales.

They are also one of the most frequently encountered despite their
preference for deep water.