This is the amazing moment a car driver leaps from the blazing inferno which
is all that remains of his car after it is crushed by a lorry on a busy
motorway.

The footage was shot by passengers in another car passing on a road
overlooking the scene on the A1 motorway near the city of San Sebastian de
los Reyes, near the Spanish capital Madrid. 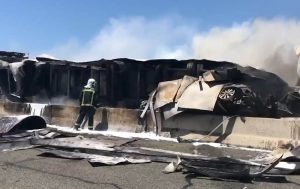 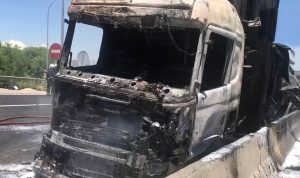 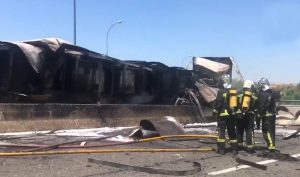 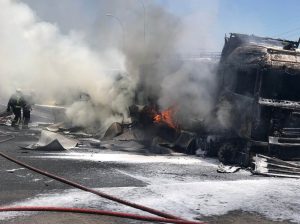 They started filming after seeing that there had been a crash between a
lorry and a car that ended up with the car on fire and seemingly embedded in
the side of the lorry.

As the flames spread, certainly from out of the fire and man leaps and then
lands on the ground with those watching stand that he managed to survive the
blazing inferno.

People watching the scene in a nearby road can be had commenting have
clearly spotted that there is a man inside – saying “go out of there, it is
on fire” and screaming in horror.

The dramatic accident caused extensive delays as firefighters battled
battled to get the blaze under control and then clear the wreckage on the
road which is one of the main routes into the capital.

According to officials the accident happened when the lorry smashed against
the central reservation crashing car driver in the process.

Emergency services found the driver that escaped from the fire, who was not
named but who was reportedly 43 years of age, badly burned but alive and he
was transferred to the hospital of La Paz in Madrid where his condition was
described as serious.