Two Belgian tourists holidaying in Spain were rushed to hospital after the
driver mixed up the gears and plunged off a 32-foot cliff.

The incident happened on the popular Balearic island of Marjorca off Spain’s
east coast.

The 53 and 58-year-old Belgian tourists, who have not been named, are being
treated in hospital for their injuries.

According to local media, the couple had parked their rented Nissa Micra
next to the barrier on the cliff above the S’Llot beach.

Reportedly when they went to leave the driver put the car in first gear
instead of reverse and accelerated forwards, breaking the wooden barrier and
driving straight off the 10-metre (32-foot) cliff.

The car fell down onto the beach, where many beach-goers were lying on the
sand, but thankfully did not hit anybody. 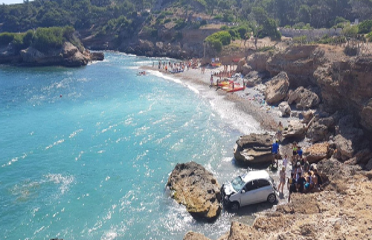 A photos shows the small white car nose first in the sand between large
rocks and partially in the sea.

The two people inside were rescued by firemen who extracted them from the
car and took them to the car park where an ambulance was waiting.

Official sources have reported that the 58-year-old man sustained fractures
and the 53-year-old woman suffered from heavy blows but both are stable.

Police cordoned off the broken barrier and say they are investigating the
incident.

The damaged vehicle was removed from the beach by crane and left in the car
park.